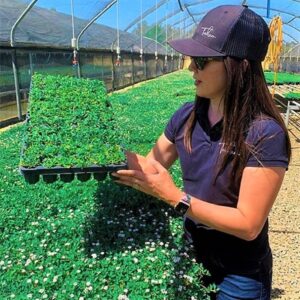 The entire world is tussling with global warming and drought related problems. Unless effective measures are taken to reduce water use and carbon footprints, the Planet Earth will soon turnout to be uninhabitable.

KURAPIA is a Japanese patented innovative groundcover derived from the Native lippia nodiflora (a close cousin to the U.S. varietal). KURAPIA requires minimum irrigation and uses just one third of the water used by most grassy groundcovers.. KURAPIA has been designed to grow even in the driest climates without any problem. It was even tested in the deserts of the Middle East and it grew well with just one third of the water that a groundcover normally requires.

KURAPIA is a DNA modified variety of lippia groundcover developed by Hitoshi Kuramochi from Japan. This green product has received many International Awards including the Excellence Award from Nikkei Economics Newspaper in 2008.

KURAPIA was developed as an effort to find a deep rooting ground cover that grew fast with minimum water consumption. KURAPIA is a wonderful green product that is helping afforestation efforts Worldwide by several governments. Moreover, as this groundcover roots very deep and spreads fast with minimum water requirements it is being used as a cost effective way of preventing erosion.

KURAPIA is also a perfect solution for people looking for maintenance free lawns. There is no need not for artificial lawns that have no real ‘green’ value any more. KURAPIA is designed to grow horizontally and not vertically so mowing and other maintenance issues are minimized. This same holds true with water bills as KURAPIA requires very little water. This is a very cost effective and beautiful ground cover.

KURAPIA, which was originally introduced in Japan, is now in U.S. markets and especially in California. KURAPIA also grows in severe pH soil conditions and so it is suitable for growing in most parts of the world including the driest and hottest climates like we see in Riverside and the Coachella Valley.